It's big, fast, exciting and very American! Sunday February 5th marks the 46th annual Super Bowl. So what does this day mean for a typical American and how can you participate in Boston?

For most Americans, Super Bowl Sunday is as big as the fourth of July. One of the biggest sport celebrations of the year if not THE biggest.   On that day sport fans can expect good eats, plenty of beer, funny commercials and grand super bowl style half time show.

All the big sponsors line up for the most expensive ads of the year.  This year NBC ad space is about 3.5 million which sold out around Thanks Giving. These 30 second ads are usually super clever delivering the biggest bang for corporations buck.

This year our beloved Pats have once again made their way to the Superbowl. A very anticipated rematch against the the NY Giants will take place in Indianapolis.  The Giants bested the patriots back in 2008 when Eli Manning shocked the sports community with a  17 14 win. So New England sport fans will either stake out their favorite bars or plan a super bowl party of their own to root for the good guys in blue. Oh and for internationals... it's football is not futbol.

Bars to catch the game: 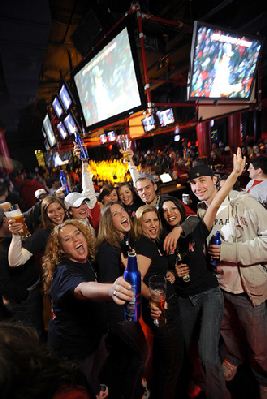 Game On: With over 90 HDTV's, huge projector screens and 2 floors of screaming sports fans, Game On is a great place to post up and watch the game for hours, you can even reserve a VIP table to get one of the best tables in the house. Usually a live DJ does various contests and giveaways during games. 82 Lansdowne St.; 617-351-7001

The Greatest Bar: Home to the largest HDTV in the city, The Greatest Bar's set clocks in at a massive 14ft. The Greatest Bar has three floors that are all dedicated to watching sporting events, so there is not a bad seat in the house. 262 Friend St.; 617-367-0544

Champions: Located in the second floor of the Boston Marriott Copley Place, Champions is a great spot for a more upscale Super Bowl viewing destination. Come here if you don't want to get covered in beer when someone scores a touchdown. The dining area is located below a gigantic 24 foot projection screen that is able to be seen from anywhere in the bar. 110 Huntington Ave.; 617-927-5304

Lord Hobo: If food is your main concern on Super Bowl, head over to Lord Hobo where you can dine on eclectic American fare like truffled French fries and barbequed sweetbreads while watching the game. Not to mention the 70 craft beers you can choose from (40 of which are on draft), and strategically placed TVs at every corner of the bar so you won't miss a play. 92 Hampshire St., Cambridge; 617-250-8454