If you have taken a stroll through Boston's Downtown Crossing neighborhood recently, you've surely seen all the on going

constructions. Prime developer Millennium Partners, have even more plans for the heart of downtown Boston. They are the firm behind the soon-to-be $620 million Millennium Tower at the corner of Washington and Avery. Currently, Millennium Partners own the property where the Ritz Carlton hotel and Residences sit, as well as the neighboring site behind it. Owning various landmark properties around the Boston area, Millennium Partners has a deep and substantial relationship with the Downtown Crossing neighborhood.

While Downtown Crossing is known to be an area that during daylight may quite possibly be the busiest neighborhood of the city, it is far by comparison come nightfall.  Numerous projects are in the works to 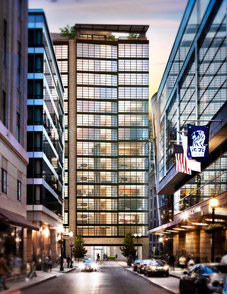 address that problem, and hopefully revamp Downtown Crossing over the next decade or so, permanently transforming the neighborhood's bustle post-sunset.

Alongside the Millennium Tower, another Downtown Crossing innovation also in its inception stage is a planned amphitheater. This addition will transform the wedge-shaped plaza at the corner of Washington and Franklin streets currently known as Shopper's Park. Shopper's Park will soon offer Bostonians and tourists alike a small amphitheater where passerby can relax or enjoy street performance similar to the one popular in Manhattan's Times

Square. The amphitheater will compliment Millennium Partners monumental project of renovating the Burnham Building, Filene's historic home for retail and office use as well 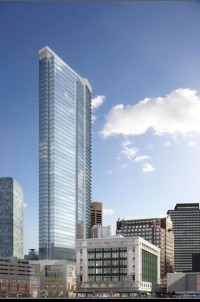 station, is part of Millennium Partners' vision to revive the decrepit Filene's block downtown. The plans have sparked enthusiastic buzz among city officials and neighboring business owners alike, as T spokesman Joe Pesaturo was quoted as saying, "the MBTA welcomes any ideas that are designed to promote and encourage the use of public transportation". Responsible for designing the upgraded Shopper's Park is Boston Architect and Harvard School of Design Assistant Professor, Eric Howeler. While architectural plans of the structure have yet to be released, we're sure the amphitheater will prove to bring new life to Boston's Downtown Crossing area, transforming and restoring it to its former glory.