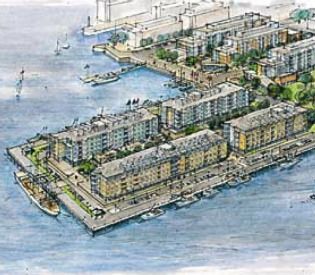 After a year in limbo, a proposed development in East Boston is proceeding as planned. Located in between Marginal and Lewis streets, the project is one of four proposed developments in the Portside area in Eastie. The developers, New Jersey-based Roseland Property Co., is planning to break ground later this year. Once completed, the apartment complex will have 176 apartments to offer to the general public, with panoramic views of the Boston skyline. The whole area of the Portside development encompasses 13 waterfront acres in the East Pier district, right beside Piers Park.

The other three projects - WinnDevelopment's Clippership Wharf, developer Philip DeNormandie's Hodge Boiler Works, and a New Street industrial redevelopment are also slowly coming out of its infancy development stage after the plans have been reduced towards becoming more of apartment-buildings than condominiums. The whole redevelopment once completed, is also projected to sprawl out 700,000 square feet of retail and commercial space.

Read more about this development, as published on Bostonherald.com.