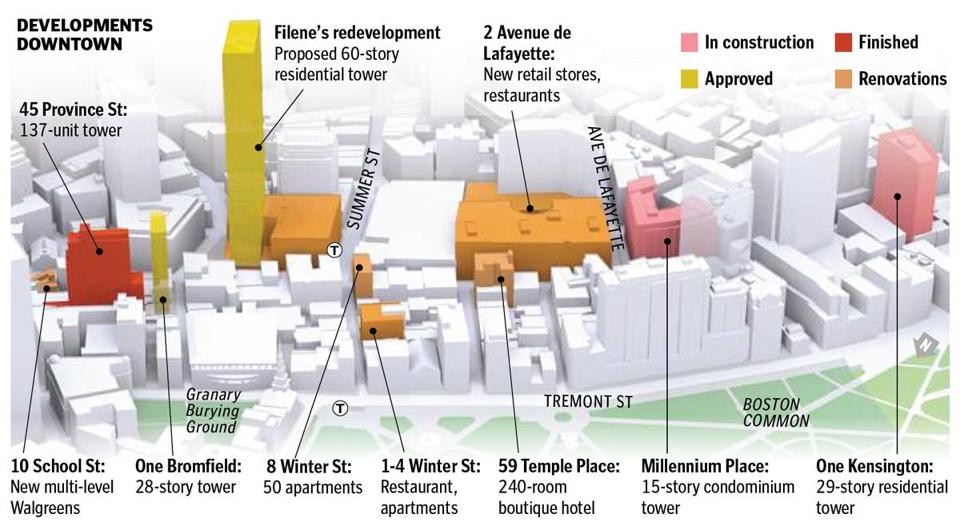 It looks like downtown Boston is finally headed for a much-needed (and much promised) revitalization of the area with hi-rise buildings and developments well under way. One could say that a lot of city dwellers have given up hope for the city's central commercial spot, as plans for the huge hole left by the departure and demolition of the former Filiene's Basement fell through when the economic crisis hit in 2007. In fact ever since that fateful year, you won't expect Downtown Crossing to be referred to as "downtown Boston" again at all, as closure upon closure of businesses happened almost sequentially. A study commissioned by the city also showed that Back Bay, Beacon Hill, and the Financial District were a Bostonian's go to answer when they were asked where "Downtown Boston" actually is. 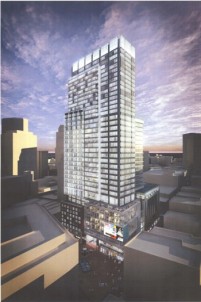 But all of that is about to change. The completion and successful turnover of sophisticated residential tower 45 Province last year was only the beginning of good things for this struggling downtown district. In fact, so much is about to happen in the area: the Millennium Residences, the Times Square-esque open amphitheater on a newly renovated subway terminal, and the 60-story residential tower that will rise on the property vacated by Filene's Basement and is poised to change the city's skyline, to highlight a few. Even shopping is soon to return to the site, as 2 Avenue de Lafayette has gotten approval from the city to renovate and reposition its shopping complex to include a host of new retail shops and restaurants.

The big development that everyone's excited for however, is the construction of the $620 million residential and retail tower that's positioned to fill the hole Filiene's Basement left behind. Scheduled to begin next year, the construction of the massive 60-story building will bring new life to the city's old downtown, and is set to be the tallest residential building in town. It is planned to have at least 600 housing units available, and at most have 100,000 square feet of commercial space.

To add to the mix of new developments, projects in the Downtown Crossing district aren't just aimed to cater to residential, retail, and commercial clients, as a 240-room boutique hotel is also set to rise along 59 Temple Place (now being used for office space). These developments will surely upgrade the real estate marks of Downtown Crossing, and should put the district back on the map of both tourists, investors, and locals who are seeking living spaces within the city.

Graphics courtesy of The Boston Globe.