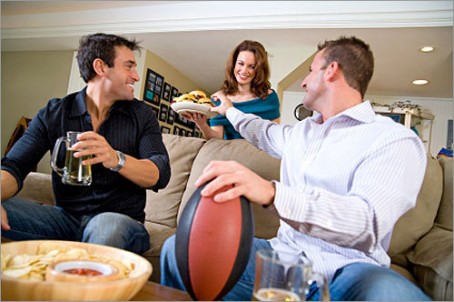 If you're one of the hundreds of millions of people who follow the Super Bowl, then this article is for you. Even if our beloved Patriots didn't make it to this year's big game, it doesn't mean that you won't be glued to the boob tube come Sunday night as the Baltimore Ravens battle it out with the San Francisco 49ers. Here are some neat ideas on how you can spruce up your space for Sunday's Super Bowl game event:

It always nice to have a few friends over, Super Bowl or not. The first thing you'd want to determine if you're throwing a game day party is your guest list. Seriously. There's no need to be all formal about it, rather going through who you're inviting, who's coming and who's not going to show up will give you an idea of how crowded it will get in your living room. This also makes it possible to plan your food and beverage needs, because the worst thing that could happen is that your party goes dry, and that's it for you and your buddies!

Setting the ambiance doesn't necessarily mean transforming your living room into something else it isn't. Having the right "small" accessories makes a big difference. For instance, put up some of those collegiate team flags and banners you have in storage, they might be of old teams past, but they're still sure to enliven the sports mood in your living room.  Another simple thing you can do is to go and grab some Super Bowl themed paper plates, and cups from your local grocer - just get them the same time you grab grub for snacking, saves you a lot of time.

Lastly, what Super Bowl Super crib is complete without a football? Keep one lying around, and it's sure to be used at one point in the evening. Have past NFL magazines? Bring them out, it'll be good to browse during those downtimes.

Putting the "Bowl" in Super Bowl

Now that you've got your place all set-up, the next thing you need to do - and probably most important thing next to the game itself - is to figure out the food. Your place might be all decked out, but if your snacks and dishes aren't, then forget it. There isn't anything scarier than a hungry mob of supercharged football fans. A tried and true trick is to focus all your efforts towards the snacks.

If you have time to spare, try making an original nacho recipe from scratch. Those without the free time can simply mix sour cream, salsa, and grated cheese together for a great dip. Other great snacks include cheese poppers, honey-roasted peanuts or anything that fits into a bowl and can be eaten by hand. But, if all else fails, there's always take out and delivery. Though, if you are indeed planning to order make sure that you have a) ordered enough, and b) order ahead of time, giving an hour lead time. Whichever you do decide to do, remember that a buffet setup is the best way to go - camaraderie and culinary all in one table.

One sure-fire way to entertain is by organizing betting pools. Ideally, these games are done in a way that even the guests who don't know a thing about football can join in. For instance, you can bet on who will score the next touchdown, what the score at the end of each quarter will be or even who'll win the coin toss. Make charts or grids so that the wagers are clear and keep the pot low so that no one blows their wallet.

Depending on the people and the atmosphere you intend to create, keep the following details in mind. If it's a real manly, poker-night type of shindig, pass cigars around. Make sure there are enough chairs for everyone to sit on. Provide a side room for those who came for the food and atmosphere, and not the actual game.

Organizing and hosting a Super Bowl party doesn't have to be time-consuming or stressful. Do it right, and you'll be able to watch the whole game, enjoy some great food and relax with your friends. Just remember; if you do it too well, people will be lining up outside your door for Super Bowls to come.

BUT if you find that hosting is just not your gig, then head on over to these nearby sports bars that offer crowd pleasing specials come this Sunday's big event:

Watch the game on the bar's 12-by-24-foot viewing screen or on one of the 40 other TVs throughout the Boston branch on the second floor of the Boston Marriott Copley Place (left). At the Cambridge location, there will be 50-cent wings all night and a free buffet during halftime, in addition to specialty menu of rival dishes.

Enjoy all your football favorites at Clery's, including 5-foot subs, wings, and drinks. There will also be a wing-eating contest featuring the first five people to sign up. The winner will receive a football prize pack and their name on the wing trophy. Purchase tickets in advance at Clery's or at

Atlantic Beer Garden will be airing the game on 23 HD TVs and two projection screens. They will be hosting a corn hole tournament at half time with the chance to win Jameson prizes including tabletop corn hole games.

According to its website, Game On prides itself on providing fans with "a better view than a 50-yard line seat" with their 90 HD TVs. They will be offering special menu discounts on items such as buckets of wings and two cheese pizzas for $15. The Fenway bar will also be giving away three pairs of Red Sox monster seat tickets at halftime.