If you've been house hunting in Boston, you've probably come to terms with that fact that properties in the districts by Downtown are a bit hard to come by. Inventories are low, prices are getting steep, and there isn't much new development - at least not yet since most are currently being constructed for delivery in the next two years. But apart from that side of town, there's one neighborhood you might have overlooked when you ticked off those areas you thought you were interested in: Brookline.

According to Boston Business Journal's latest edition of its quarterly report on the Hottest Housing Markets in Massachusetts, Brookline holds the No. 1 spot for the whole state. Specifically, the borough's 02445 zipcode commands a prominent position in terms of transaction activities and year-over-year property value increases.  Stretching from Brookline Village to the surrounding streets by Brookline High School and outward to Longwood Medical Area, the 02445 zipcode has seen potential buyers line up for a peek at promising properties given the postal code's 14 percent increase in value from last year - a feat that no other place in Massachusetts (and only a few nationwide!) has seen since the housing bubble burst in 2007. 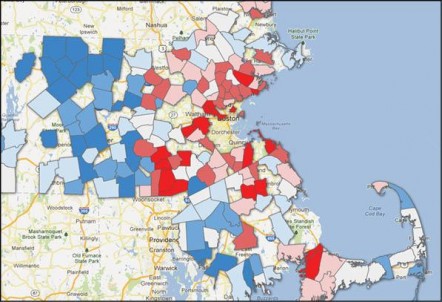 Fueled by successful bids well over and beyond asking prices, Brookline is soaring beyond Boston in terms of quality of properties and proximity to convenience. It also greatly helps that Brookline High School is consistently ranked as the top public high school in Massachusetts, boasting numerous gold medals for its students' and faculty's academic excellence thereby cementing its position nationwide as one of the most prominent high schools where graduates transition to colleges that belong to the Top 50 Nationwide. This is particularly a powerful tool that attracts younger couples who are contemplating starting a family.

Among 291 communities in the Commonwealth, Brookline's 02445 district ranked the top-most active; however, it's not only Brookline that saw year-over-year property value increases. In fact, 221 communities in the state showed improved aggregated values in the same first quarter period spanning from 2011 to 2013, signaling the return of the real estate sector. In past quarters, the recovery was largely concentrated in a handful of Boston's residential neighborhoods as well as some of its tonier suburbs within the Route 128 belt. Brookline however, is the only borough that's been a mainstay among the state's hottest neighborhoods even during the recession.

In terms of other area's increases, economists and real estate pundits alike agree that a mixture of easing mortgage standards, low interest rates, and pent up buyer demand brought about by the past years' prolonged downturn, have contributed to the appreciation of values in these areas. However, low inventory is still the primary cause of property appreciation in these neighborhoods. Specifically, there are only 1.93 million existing homes available in the Bay State as of March 2013, just enough for roughly 5 months, assuming current sales pace hold. And if you're following traditional models, inventory that's below 6 months automatically qualifies the industry as being in a seller's market. Perhaps this is really the best time to sell your property, as newly-constructed developments are soon to be made available that could potential dilute the progress of property prices.