Things are looking up, up, up for Boston's high-end condominium market as turnover and average prices reach higher-than expected levels. Though Back Bay continues to dominate the luxury condominium market in the city, rival neighborhoods are very closely catching up.

The most recent figures show that majority of condos that were sold between January and June of this year were priced above $500,000 but below the $2-million dollar mark. This is not surprising, as listings of lower-priced units have lagged the past couple of months and seem to have retreated from the market, limiting the already limited inventory that both brokers and buyers are sifting through. 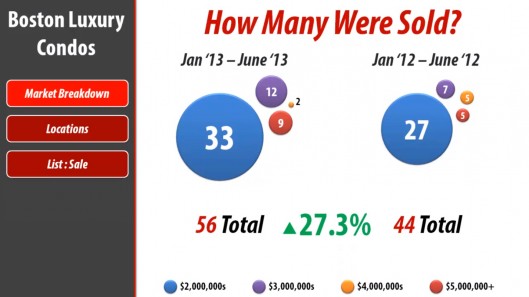 Comparing figures from January to June 2012 to the same period of this year, there is a 27.3% overall increase in condominiums sales, with 56 units closed in total, compared to last year's 44. This increase includes condos priced $500,000 to $2 million, $2 million to $3 million, and $5 million and above. Falling short of sales this year are condo priced between $4 million and $5 million. The main argument regarding this "abnormal" sale figure is most likely caused by properties that are in the FInancial District which have been put on hold this year. The increase in the higher-end and thus higher-priced units that are over $3 million only corroborates the fact that the market is headed in an overall good direction. In fact, this increase (refer to purple balloon) is almost double that of last year, whereas the increase in sales of condos priced below $2 million are only modest. 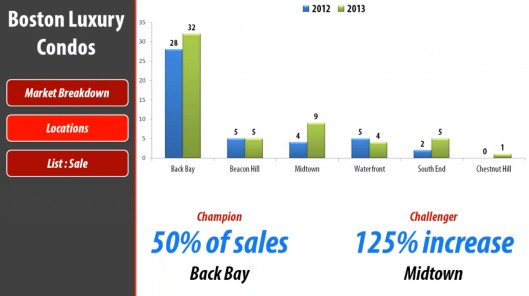 Breaking down the condo sales by neighborhoods, you can see that there are only six major neighborhoods that have sold units that are over $2 million. Though Back Bay is still king of the high-end condos, Midtown and the South End are fastly closing in. In fact, increase in sales growth in these two neighborhoods are pegged at over 100% - more than Back Bay's for this year. In spite of this, Back Bay still holds the most number of high-end condo sales, accounting for 50% of sales through the city. Beacon Hill and Waterfront remain active areas to bid in, however the properties along the Waterfront have lagged in performance, possibly because of buyers holding out for newer developments that have broken ground in the Innovation District and Fan Pier areas in South Boston. 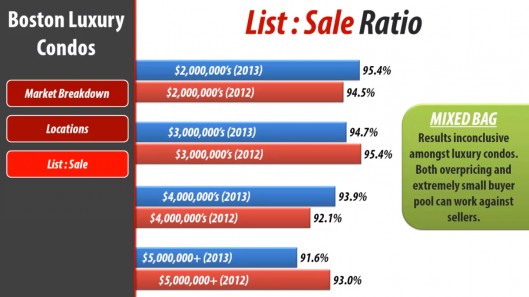 With regard to the list-to-sale ratio of the condo market in Boston, you can definitely see that all of the luxury properties priced above $2 million have been bought below the listing price, clocking slightly under the average of 96%. Again, this figure accounts for high-end properties sold from January to June - a sharp contrast to "regular listings" that are below $2 million that have closed well above and sometimes 15% over the listing and asking prices. The most plausible explanation for this is that the investor market for high-end condo properties have a much smaller pool than that of the "regularly-priced" properties.

It's also interesting to note that last year, higher-priced condominiums had a greater list-to-sale ratio than that of this year, confirming reports that bigger whales have snapped up bigger properties during the latter parts of 2012, just before the real estate tide turned against them, completely becoming a seller's market. Timing indeed is everything!