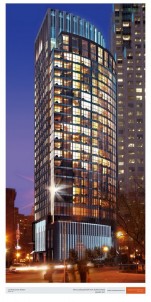 There's a new darling in Downtown Boston, and it goes by the name of Radian. You might have heard of it before, just under a different name: 120 Kingston Street.

That's officially the address of the 26-story apartment tower in the convenient junction of Chinatown, the Financial District, the North End, and the Leather District. It is a game-change-y type of development that replaced an ancient Boston archetype building. It is as modern as you can get nowadays, with all glass windows, and concrete and steel floors with chic and stylish finishings once fully complete. The tower's developers, Forest City and the Hudson Group, have officially christened the 120 Kingston development Radian Boston, as it is literally radiant from all view corners, as well as it mimics a 'radian', the angular measurement that's tied to a circle's radius. As you can see, the building is cleanly designed to reflect this style.Within the modern building's design are 240 luxurious studio, one-bedroom, and two-bedroom units. Radiant is aggressively taking in applications for move-in starting early Spring, 2014. In addition to its well-appointed units, future residents will be delighted to know that there's also 4,500 square feet of ground-floor retail space. The commercial slots are poised to host nuvo cuisine restaurants that match the ambiance of the area, as well as independent retailers and shops. What more could you want from an up and coming development?

Speaking of The Greenway and the Northern tip of the city, The New York Times recently published an article saying how the word "north" affects property prices on real estate found marketed in this region of the country's leading urban cities. Why? Well, it turns out that people do go gaga for greenery. In New York, North of the city is synonymous to access not only to Central Park, but also to the two water pond features that span its green space. Though 'North' End Boston lacks the breadth and depth of Central Park (The Rose Kennedy Greenway is immensely minuscule compared to its New York counterpart), the area makes up for in 'aquatic features' - with waterfront harbor views plus panoramic city skyline sceneries.

Find out how you can get early access and sneak a peek of Radian Boston by contacting us at (617)505-1781 or by emailing us info@bostonire.com.