With the city bustling with building projects, you would think that most of the outlying neighborhoods would be a 'quiet place' to live in. Well, they are relatively quiet, especially in the evenings when construction is at a temporary halt. One of these neighborhoods that's just continually rising to the occasion is none other than nearby South Boston as two separate promising projects totaling to 89 new residential units were approved by the Boston Redevelopment Authority's Board late last week. 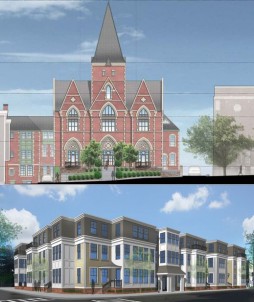 One of the proposals is by  developer Bruce Daniel and his partners to convert the St. Augustine's Church at 225 Dorchester St. into residential units and demolish the St. Augustine's School at 205 E St. was approved by the board. Both the church, which was constructed in 1874, and the school have sat vacant for a number of years since they were closed by the local Diocese because of mounti ng financial pressures. The site, which sits on an approximately 23,400-square-foot lot, and the school, located on an approximately 25,600-square-foot lot, were purchased by the developers for an estimated $2.4 million.

The $12.5-million proposal for the church calls for converting the structure into a residential building for 29 condominium units and 27 underground parking spaces. Four of the units will be affordable. Although the church will be preserved, dormers will be added to the structure to allow for more residential space.

The $12-million proposal for the school calls for demolishing the existing structure and building a new three-story building to house 30 condominium units and 63 parking spaces, according to documents filed with the BRA. Four of the units will be affordable. Both projects are expected to break ground in 2014 and be completed by 2015, according to the BRA. 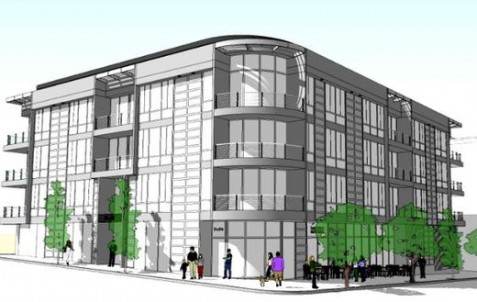 A separate $8-million project at 11 Dorchester St. was also approved by the board Thursday. The project, proposed by Allure Boston, LLC, calls for the demolition of the existing commercial structure on the site and the construction of a five-story building for 30 condominium units and approximately 2,230-square-feet of ground floor retail space. The units will be divided between three studios, 17 one-bedroom units, and 10 two-bedroom units. Fifty-four parking spaces are included in the project and they will be housed in an at-grade and below-grade garage. The project is expected to break ground in early-2014 and construction is expected to be completed by mid-2015. The approximately 12,800-square-foot property is currently occupied by New England Auto Body.

Speaking of South Boston, another area alongside the 'outskirts' of the city is gaining attention - and momentum in terms of its command on price. It's been reported that the growth in median single-family home and condo prices in the past nine months in Roxbury has far exceeded the rise in values across Suffolk County and across the state.  More specifically, the median single-family home price in Roxbury soared 32 percent to $335,000, more than double the rates of increase seen across Suffolk County and statewide.

These figures also show the median condo price in Roxbury rising 13 percent to $510,000, easily outpacing median price growth across the city and the state, as homebuyers hunted for deals amid Roxbury's beautiful Victorian homes and tree-lined streets. Single-family home prices are now close to a pre-recession peak in Roxbury, an amazing recovery considering how many foreclosures took place there, and condo values in the neighborhood have reached a new high.