Up until recently, people who have been musing around the idea of living in the South End only had two choices: brownstones or converted units. However, like most neighborhoods in Boston nowadays, the district is experiencing a boom of developments, particularly ones that are brand new, giving a third option for those seeking solace in the hot Southern urban downtown tip of the city.

Roughly more than a year ago, Ink Block's ambitious and transformative 8-building project launched and broke ground. This year, Sepia came into fruition and availability. The multiple-building project sits on the former Boston Herald Site, a few blocks away from Back bay, and just by I-93. Though the completion date of the entire project is still three to four years away, it seems that demand for brand new condominium housing in the area is highly lucrative (if one is to believe the rumors of Sepia being sold out this early are true). 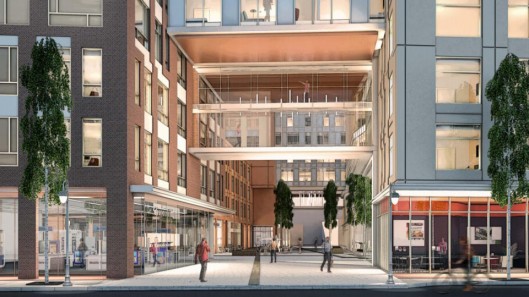 In response, comes another multiple-building project from Burlington, Mass-based Nordlblom Company. To be situated in the same vicinity as Ink Block, 345 Harrison St., Nordblom's proposal calls for the demolition of a two-story warehouse to make way for the 569,400 square feet project. Once completed, the condominium complex is proposed to have two structures - 13 and 14 stories tall, spread over the two acres of re-zoned land, with a total of 602 rental units (233, 360 units, respectively) alongside 33,500 square feet of ground floor, "18-hour" retail and restaurant space.

Nordblom Company hopes to break ground and start construction in the second quarter of 2014, if approved by the Boston Redevelopment Authority.