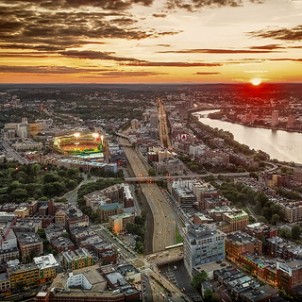 If you're looking to get ahead of winter and break the cold spell with some good news, look no further. There's plenty of rosy things coming out from the real estate sector, particularly at the beginning of this year, as home values increased in January, well above the national average, according to the Zillow Home Value Index.

Homes in Boston and its surrounding areas rose by 8 percent year-over-year in January to $351,600, and 10.7 percent in the city of Boston to $418,300, faster than the national increase of 6.3 percent over the same period. Elsewhere near city proper, home values also increased dramatically: Brookline ($591,500), Cambridge ($541,800), Newton ($793,100), and Somerville ($435,800) surpassed their prior peak home values. In short, values in these communities are as expensive as they've ever been, so if you still want to buy, perhaps now is the best time ever before spring selling season arrives.

What comes alongside this bit of news is no surprise, however. The biggest problem facing Massachusetts buyers right now is the lack of immediately available inventory which is the main culprit of why prices seem to not be stabilizing, and in fact, is escalating rapidly. As Boston is one of 13 of the 35 largest metro regions to have a falling inventory of available properties, the tightness in the number of homes for sale is likely helping to keep home value appreciation at a boil in the area, relative to the national pace. The number of homes listed for sale in the Boston metro was down 11.2 percent annually in January, the 27th straight month in which inventory in the area has fallen year-over-year.

However, with more than a dozen mid- and large-scale developments to becompleted this year, inventory should rise back up, and could therefore taper down further increase in prices. This is precisely the reason why, if you're still in the market to invest, now until the start of the spring selling season is your best bet to get into the game. One caveat though: if you go in now, you will be faced with limited, yet choice listings; but if you wait until summer, you'll risk inflated prices. Damned if you do, damned if you don't. It's all a matter guts, we say!

Finally, and as if to prove to you that you're not alone if you make the decision to take a go of the current real estate climate, we're also proud to announce that alongside figures pertaining to home values in January, home sales have also soared to its highest level since 2007.

In fact, single-family home sales in Massachusetts increased by 5 percent in January -- the highest number recorded for the month in six years. The surge, it seems, comes on the heels of two months of modest decreases in sales volume. January home sales in the Bay State increased to 2,728, up from 2,599 in 2013. The last time sales volume was bigger in January was in January 2007, when 2,953 houses were sold.

Another thing to note about sales transactions for the same period is that there are perhaps more cash buyers now than ever before. In previous periods and in previous years, cash buyers traditionally accounted for a mere 10 percent. However, December 2013-January 2014 figures reveal that more than a third of all transactions in that period were cash deals.

With reports from TWG and Zillow.