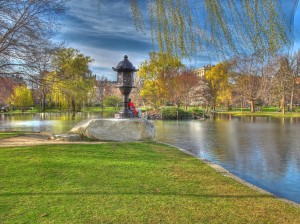 Believe it or not, despite Boston's still-but-less-frigid temps, Spring seasons is officially (and finally) here. And if you've ever put some thought into moving to Boston, perhaps this season will convince you of how beautiful the city could be, minus the Nor'easters and polar wind chills. Spring is officially a time in the city for walking around and outdoor patio dining.

So if you're planning on doing some house hunting, spring will be your best bet not only to see the city in all its glory, but also get a taste of what it's like to live in your future home amidst a Bostonian spring season.

Here are some of our top picks of the season we recommend newbies and oldies to the city alike should do this spring. And after you've done a couple or two, tweet us a quick note how you liked that event @BostonIRE ... you never know, we might just have some goodies waiting to be given away!

Food Trucks Festival of New England Get ready for food trucks! Not only are there a few new food trucks on Boston's horizon but The Food Truck Festivals of New England has also released their 2014 schedule. It looks like we have two coming up this June; check out the schedule here.

Ice Cream and Lobster Rolls Another sign of spring in Boston (South Boston, anyway) is the time of year when Sullivan'sre-opens. The landmark joint has been serving up ice cream and lobster rolls since 1951. Every year the restaurant closes after the last weekend in November and opens the last weekend in February.

Spring Clean your style with Gilt City Spring cleaning your closet early is certainly a sure-fire sign of the season. And with this weekend's Gilt City Boston Warehouse Sale, we're pretty sure you'll be trading in your Uggs for some designer sandals. The event takes place this Saturday, March 22 from 9 a.m. to 5 p.m. Find out more details, here.

Great foods, Al-fresco Boston restaurant patios are preparing for warmer weather. Many will open sometime this April and May. And fortunately for us, there's a new outdoor patio in town at Precinct Kitchen + Bar. The restaurant is set to open this Friday, March 21. The restaurant's patio will have two outdoor fire pits and string lighting overhead - and should be open by late April.

DineOut Boston (formerly known as Restaurant Week) Speaking of foods and al-fresco dining options, if you still haven't tried any of the "nice" restaurants around town, the next two weeks should give you much pleasure, as more than 200 non-chain restaurants give a taste of their best lunch and dinner plates, all priced between $15-$40. You can't beat that! It's indeed a foodie's dream. Check out all the details about it here.

Fenway Franks & Red Sox Opening Game Baseball season is right around the corner, folks! Red Sox opening day is April 4, where the World Series champs will host the National League's Milwaukee Brewers in the home opener at Fenway Park. And after yesterday's "buzz" during the team's spring training game, we're pretty excited to see the season begin. Not to mention, a new hotdog stand with Fenway Franks will be gracing Landsdowne St. very, very soon.

Milling About at the Marathon Given the magnitude and the meaning behind America's longest-running and most-participated marathon, this year's event has an even more special sense to the city, given the attacks that paralyzed the friendly known-around-the-world sporting mega event last year. But, not to be outdone, organizers have had a long time to prepare an even safer, more fun, and lively program this coming April 21.

Independent Film Fest Why attend Boston's 12th Annual Independent Film Festival when you've got your Netflix subscription? Do we even need to answer that question? Since 2002, the dedicated folks behind the festival have worked hard to bring directors, actors, producers, sponsors and attendees together in an interactive environment and create an experience beyond just previews and popcorn. The IFF runs from April 27 to May 4.

Boston Calling Envious of other city's music festivals? Well, Boston has an answer to that - twice in a year, in fact! For the whole weekend of May 23-25, and again on a yet-to-be-annonced date in the Fall, Boston welcomes the Spring and Summer season with a loud bang, inviting both independent and mainstream artists to grace government center's massive make-shift stage. From Jack Johnson to Bastille, Boston Calling's got it all. Get your tickets now by click here.