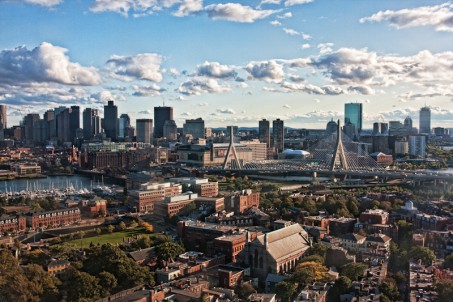 You read it right - Boston was ranked as the 17th Most Dynamic City in the World! That's a prestige that we think every blue-blooded Bostonian should be proud about! The ranking was done by evaluating three different factors: commercial real estate, socio-economic momentum, and high-value incubators (in other words, the quality of the city's education infrastructure). All in all, the study looked at 111 cities all over the globe, with seven US cities making it to the Top 20.

Who else made the cut? Read the original article below to find out:

NEW YORK -- If you live in San Francisco, you can now say you're an inhabitant of the most dynamic city in the world. At least according to the real estate firm Jones Lang LaSalle, which compiled a list predicting the 20 most dynamic cities with the most momentum worldwide for 2014.

Using three main categories - commercial real estate (30%), socio-economic momentum (40%) and high-value incubators (30%) with high-value incubators representing "the quality of a city's education infrastructure, its innovation capability and the strength of its technology sector," according to the study - the firm ranked 111 global cities looking for those with hallmarks of a lively and progressive area. Cities with the ability to adapt and innovate quickly, a knack for fostering new and creative businesses, new building construction and upward trending real estate, made the top 20.

And seven of the 20 cities were from the United States. California harbored two -- San Francisco and San Jose -- thanks to their high-tech Silicon Valley contributions.

Want to see what else made the list? The rundown below takes a closer look at the top 10 plus the other three American cities that made it to the top 20.

San Francisco was the "undoubted winner" of Lang LaSalle's list, with "a unique and unrivaled reputation for innovation, venture capital and startups," according to the report. Additionally, the firm believes San Francisco will have "the strongest rate of office rental growth in North America during 2014."

Last year, the Bureau of Economic Analysis found San Francisco metro area had the fastest real gross domestic product growth in the nation in 2012 at 7.4%.

London is still on the upswing since the 2012 Olympics and "above any other global city in terms of cross-border real estate investment (at $64 billion over the past three years)," according to the study. A huge retail market generates 40 percent of all money spent in the city and London produces about 10% of Great Britain's total national income.

Dubai's real estate is predicted to boom for snagging the 2020 World Expo, expecting to net about £4 billion worth ($6.69 billion) of infrastructure investments according to the Financial Times. It's also a "service hub" for the Middle East, North Africa, South and Central Asia and a "preferred staging point for an increasingly dynamic Sub-Saharan Africa," according to Jones Lang LaSalle.

The most populous city in China made the list in fourth place because of its high socio-economic swing, but lacked in real estate and high-value incubators. Its economy certainly has momentum: its GDP increased by 7.5% throughout 2012, up to 2 trillion Yuan.

According to Jones Lang LaSalle, Wuhan is building momentum as it realizes its position as the "hub of Central China." Wuhan scored strong on socio-economic and commercial real estate momentums but toward the bottom on high-value incubators.

While scoring in the second to last ranking for socio-economic momentum, the Big Apple took top positions for real estate and high-value incubator momentum. New York is "North America's most international hub for commerce, talent and investment by a significant margin," according to the report.

Austin made its way to the list because of an attractive environment for businesses, a young and skilled population, a robust culture and a thriving innovation-friendly technology sector. It's also the smallest city featured. Maybe Austin isn't so weird.

A major trade, finance and technical hub in Southeast Asia, Singapore has been rebounding since the recession.

Other American cities that made the list:15. Los Angeles

What Los Angeles lacked in socio-economics it made up for in being technologically rich and high in real estate value.

The firm called Boston a "U.S. city to watch," saying "as the world's top education hub and with a proven ability to leverage talent for commercial innovation, it is a magnet for major international technology companies. The city has a strong and diverse economy and is addressing key points around affordability and inclusion."

Seattle scored top marks for real estate and high-value incubators, but ranked in the middle for socio-economic movement.

Ranks for the remaining worldwide cities: