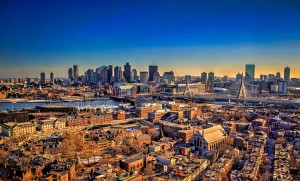 We've all known about it for a while - Boston has been seeing rising property values, above and over asking prices, and limited selection of supply. In fact, for months now, the real estate industry has been buzzing about the shortage and what, if any, it could be doing to stifle the region's recovery. But if you only look at the big picture, not all is negative.

Eastern Massachusetts - particularly towns of nearby Cambridge and Somerville - appear to be heading toward another housing boom that could turn out bigger than the last one in the nineties, when the city's populace turned to these areas for adequate supply of housing both for rent and for sale. This only confirms what we've long known to be the case: when Bostonians are left with a big hole to fill, they turn to its brother city, Cambridge. In fact, the boom has been spread out much farther this time around, and envelopes even Medford, Chelsea, and Charlestown, where construction cranes are going up in a rate not seen in decades, pushing median prices of existing homes on the market 30 percent above the pre-recession levels - that's a huge jump if you think about it for a second: that's a third of your home's value added on to it. A welcome development to sellers in those areas, that's for sure!

But let's focus our lens on the closest one to Downtown Boston for a second. Cambridge, traditionally the very first one of the outlying neighborhoods to explode when Boston experiences a housing boom, is so hot right now (and in the past year and a half!) that buyers are paying an average of 4 percent above the asking price. This is surely good news on the seller side, especially if you consider the fact that never has Cambridge seen this kind of exchange. It has never exceeded average asking prices during the last two decades. That is a significant change in the overall Boston real estate market, as it impacts not only Cambridge, but also buyers who were once used to "conceding" to properties there when Boston isn't able to offer much.

On the plus side, however, the price increase doesn't seem to be affecting the appetite of buyers. In fact, properties in Cambridge have been selling like pancakes and in cash, lasting an average of only eight days on the market before they're snapped up - a far cry from the norm of 50 to 70 days during the peak of Cambridge's housing boom in the 90's.

Despite this growth, nearby Bostonian suburbs still suffer from a tight inventory, mainly due to the whole region's slow response to demand and population growth. In fact, its been noted that with just a 4 percent improvement in local economy in Massachusetts, and housing inventory is sure to tighten up within the next three months preceding the economic upward trend. That's how limited the city and its suburb's total inventory is nowadays.

In terms of median prices, Cambridge has already climbed 23 percent in just two years, now clocking in at $600,000 for a unit, regardless of whether it is a single-family or a condominium. This makes first-time home buying even more so difficult for prospective property hunters. It creates bidding wars and offers well beyond the norm (read as "payment in full cash").

Yet, it's not only Cambridge that's been experiencing this boom. Other communities near the Cambridge & Boston markets have experienced similar trends. Jamaica Plain, South Boston, Charlestown, Somerville, and Newton have also hit pricing levels above pre-recession peaks.

Though the boom the city and nearby suburbs are experiencing are quite uplifting given the last four six years of drought for the property sector, it's not all rosy across the state just yet. Average home prices across the state is still down 9 percent from its pre-recession highs. They are however, getting there, are may suburban towns are inching closer to their previous peak levels.

So, if you're still looking for "bargain buys", it might be worth your time to look not just downtown, but across Eastern and Western parts of Boston and Cambridge - neighborhoods like Charlestown, Medford, Newton, and even Alewife! These spots are sure to still have some pretty good buys, considering everything. It's either that or way it out and risk even greater price tags.