We all know that The Waterfront is where most Bostonians would prefer to live. It does after all, command unparalleled views of the harbor and is quite the ideal location especially during the summer where the Greenway is just literally a skip away for fun and outdoor-ish activities. But, as with the case with neighborhoods that are city-centric, the Waterfront is not exactly the most affordable area. Until now.

We've compiled in this article four apartments in the neighborhood that are quite inexpensive and affordable for those seeking shelter within the city's shores. You'll find that though they might be a tad above the average rent, they're pretty reasonable and even comparable to living in, say, Back Bay or Fenway. 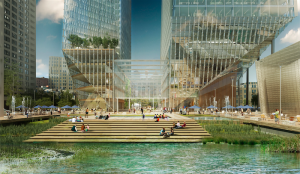 But before we get down to the deets, let's first take a look at what exactly is happening right now in the Waterfront. And if you've ever thought that what the Waterfront right now is will be what it will look like in the foreseeable future, then you're gravely wrong. We'll tell you upfront - there's plenty of projects that are in the pipeline. For emphasis, let's dive into one that's pretty controversial and, of course, exciting: The Boston Harbor Garage Project.

At first, you might think it's nothing more than hype. But recently released perspectives of the proposed project have generated much interest in the development. Currently dubbed "Harbor Square", the $1 billion project by real estate mogul Don Chiofaro, who is known for his seaside projects as well as fantastic Fenway developments, is proposed to sit on what is currently the eyesore that is the Harbor Garage. 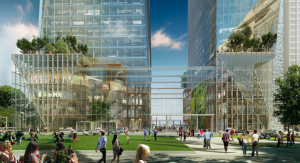 Located right across the Aquarium and adjacent to the Greenway and the Financial District on a 57,346 square-foot parcel, the development is considered one of the city's upcoming jewels with its ideal and transit-oriented location, sitting between North and South Stations . If approved, the development is proposed to have 1,300,000 square-feet of mixed-use space and create an additional 27,370 square-feet of open space fronting the harbor.

As per their press release, The Harbor Square Project would include 700,000 sq. ft of office space, 120 residential condos, three floors of retail and dining options and a 250 to 300 room hotel. All 1,400 parking spaces would be built below ground.

So where is the almost-28,000 square feet of open space mentioned earlier? Well, the proposal is set to have two towers at the site that will be separated by an open greenway, which would be available to the public at all times - something that other sea-side developments rarely offer. And in order to make this open space between the towers a year-round destination, the developer is proposing an innovation solution: a retractable roof. And what about the privacy of tenants / owners? Well, there's also going to be a separate and elevated patio that's fronting the sea as well.

With this in mind, we ask again: who wouldn't want to live in the area? Watch out and stay tuned as we uncover more details about this project in the coming months. For now, let's dive right into where you can live in The Waterfront right this minute: 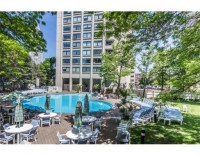