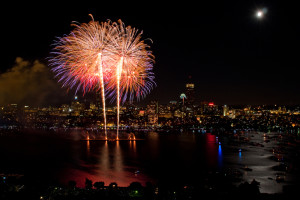 We've officially past the halfway point of the year, and with all of the action the real estate market has seen this summer season so far, it's time for a little breather as the city - along with the whole nation - slows down to celebrate our most-cherished summertime tradition, fourth of July.

And Boston, being one of the cities whose Independence Day celebrations are vastly admired, we're bringing you a rundown of all the festivities and the secret fireworks viewing spots that's sure to make you either proud of being a Bostonian, or at the very least, make you want to move to the city to be one.  And so, without further delay, here they are:

WHERE TO WATCH: THE CITY's SECRET SPOTS

On The Charles Get the best seat on the house and avoid the Hatch Shell crowds by doing your own inflatable viewing party with a kayak, canoe, or what have you. Don't have one? There are a lot of riverside companies that rent out submersibles to the public. Check out Charles River Canoe and Kayak - they usually fill up fast though, so try to rent them out before everyone does. Two thing to remember if you do decide to go with this option: (1) there are no restrooms to relieve yourself, so pace your drinking, and (2) the fireworks barge will sit on the middle of Charles in between Exeter and Fairfield streets, so it'l be ideal to anchor off somewhere close by.

Subway Spectacle There's a set time to when the fireworks are lit off, and there's no better time to take a ride on the T than then. Conductors in the past have been known to stall and halt for a bit when the fireworks display goes off, so board the train on the right time and you'll definitely be rewarded. Just a heads up, the fireworks are scheduled to begin firing off this year at 1030PM.

The PRU If you fancy a feast for the fourth, then head on over to the Prudential Observatory for a night of food and fireworks. The Pru's Observatory is open to all during the event, and they start selling tickets to the crowds at 4PM. If you decide to dine though, admission is already included, so you won't have to line up to get your tickets to the big show. Just remember to settle your check before the fireworks are lit to get the most of the night.

Splendid Staycation If you're one to take advantage of the long weekend by spending it at a local hotel, then there's no better option than checking in at the XV Beacon. The boutique five-star hotel has an open roof deck where you can lounge and sip a cocktail or two when the festivities fire off. They also have specials for the long weekend, so that definitely makes for a great holiday.

MIT Pavilion It's not an unknown fact that MIT has one of the best seats in the house where you can view the entirety of the Charles. It is more unknown to many though, that they have a wooden sailing pavilion where the university's rowing team trains and casts off. Head to Cambridge side of the town and along Memorial Drive you'll see their wooden planks - just in between the Longfellow and Harvard bridges.

WHERE TO CELEBRATE AMERICA's BIRTHDAY

Boston Harborfest, runs from July 2 until the 6th The city's celebration officially kicks off today and lasts through the weekend with plenty of patriotic parties and events to fill your long weekend. The five-day festivities organized by the Mayor's office are perfect for history buffs, with free tours, flag raising ceremonies, and parades that display the city's well-known ties to the country's independence. More here. 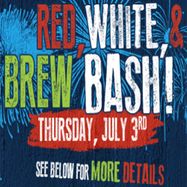 Red, White, and Brew Bash, July 3 4PM onwards Dueling Piano Bar and night club Howl At The Moon features an extravagant yet affordable 4th of July celebration. For $20, you can get a specially concocted cocktail called Bomb Pop buckets that the bar ensures will fill your Fourth of July Eve with merriment. There will also be good ol' $6 Sam Adams brews and $8 Washington Apple shots for those who don't exactly want a star-spangled hangover in the morning.

4th of July Even Bar Crawl July 3 5PM onwards Because there's nothing better than a bar crawl to show how American you are! Find yourself crawling the bar scene streets of historical Faneuil Hall on Thursday night. The event is hosted by party organizer Boston VIP List, and starts at 5PM at Stadium and will be hopping to Wild Rover, The Place, Durgin Park, and The Hideout.  Tickets are $10 a pop.

Cruise The Night Away July 3 7PM Embark on the Boston Harbor before America's birthday for a romantic night on the Odyssey's Fireworks Cruise. You'll be treated to dinner, drinks, dancing, live music and a fireworks show over the water. Tickets start at $114.90 per person, and the boat begins boarding at 7 p.m.

Birthday Bash At The Waterfront Pier 6 in Charlestown will be opening their patio earlier to kick off their Independence Bash on the waterfront, and you'll even get a front row seat to watch the USS Constitution make its annual turn around the Boston Harbor. If the weather hold up, the fireworks will also be visible from the rooftop patio. Drink and food specials will be served all day.