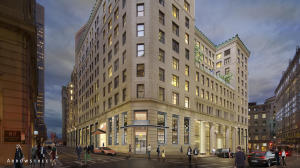 As we mentioned in our article last Monday, there seems to be an upsurge of developments and tweaks going on in the Downtown Crossing (and now Financial District) area in an attempt to "modernize" the neighborhood that's considered the Downtown junction of the city. Congress Square, a project commissioned by real estate developer Related Beal and envisioned by architects at local architecture firm Arrowstreet is only one of the handful of plans and recent projects that are creeping up the once desolate Downtown area. 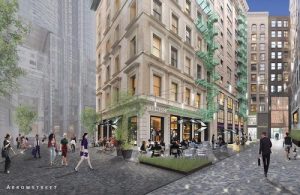 Congress Square is positioned to be a gigantic 340,000 plus square feet square of retail-office-plaza space that will be bordered by State, Devonshire, Water, and Congress streets. To complement its mixed-use nature, restaurants, retail shops, and possibly a boutique hotel and even a residential complex are also in the mix.   It is set to be completed by the Fall of 2015, just in time to be included in the busy season of openings and inaugurals, as Roche Bros is expected to bring in heavy pedestrian traffic to the area at the same time or perhaps even earlier.

A notable feature of the project is its planned 24-hour operating time, something Bostonians have long been clamoring for. Though not the whole area is set to be open round the clock, a significant portion of it will be operating 24/7 and is easily accessible to pedestrian flow. In particular, about 50,000 square feet of the alleyway occupied by Quaker Lane will have conveniences and nightlife options open to the public's enjoyment. 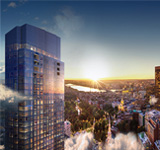 The redevelopment and revitalization plan perhaps follows the recent stride of success by real estate developers in the area, most notably by Millennium Partners. Its sold out high-end residential complex, Millennium Place, marked the era of new and upscale units available in the neighborhood. And with the recent groundbreaking of Millennium Tower - also situated in the Downtown Crossing district - more and more reimaginations of the area have been popping up in the recent months.

Millennium Tower (updated construction photos here) promises to be the city's gleaming gem of a tower, standing at 625 feet consisting of 56 stories in total, with retail and commercial spaces on its base and high-end residential units all the way to its peak. It is poised to have a total of 1.1 million square feet of space. The tower will be located in the center of one of Boston's busiest areas, and the 231,000 SF of retail space is positioned to take advantage of the large pedestrian volume. Above, up to 600 residential units, both condominium and rental, will have a mix of one, two, three, and four-bedroom units, complemented by 550 parking slots. It recently broke ground last Spring and is now open for reservations through partner firms.