It's the last Monday of the official start of Fall - and like most things, the real estate market is moving to turn a new leaf. We'll fill you in on all the exciting things that happened this past weekend: from the Avenue of Arts being redesigned to the rise of Seaport Square and rental rates in that district and its surrounds. 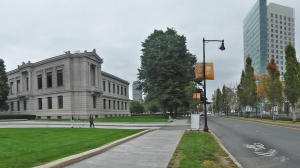 The Avenue of Arts - that strip of straight road traversing Huntington Avenue - is reportedly being redesigned to give it a fresh new look, something that's a long time coming given it's the home to the Boston Symphony Orchestra, New England Conservatory, Huntington Theatre Co., Northeastern University, Museum of Fine Arts, Massachusetts College of Art and Design and Wentworth Institute of Technology. Apparently, the Boston Redevelopment Authority wants the area to live up to that institutional weight in terms of urban design (and only rightly so!).

The city's "building and beautification agency" is seeking proposals to develop design guidelines that will elevate the area's character in terms of future development and a more pedestrian-friendly streetscape. The general idea is to really give a more coherent urban character for this most important avenue given all of the projects that will be completed within the next three to five years.

There hasn't been any timetable quite just yet, but given the city's reputation to responding to proposals expediently, we predict that we're likely to see things move by Spring of next year. 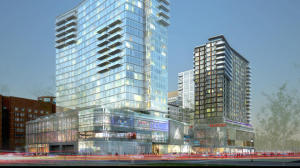 Seaport Square On The Rise

One Seaport Square, a giant part of the giant Seaport Square project in the Seaport District, could break ground in the next 30 days. The original date set for ground breaking was expected last April, but obviously did not push through. Sources say that the delay was caused by design elements being tweaked to include even more residential units in the mix. True enough, the unveiling of a movie theater together with the overall retail mix in the development looks to be an improvement of the original plan, and will likely pull crowds into the district.

Just to refresh your memory, One Seaport Square is a $600 million twin 22-story development that is part of the overwhelmingly gigantic $3.5 billion Seaport Square Masterplan that is poised to firmly establish the Seaport District as the next "it" neighborhood. It is slated to have 832 luxury apartments, and 260,000 square feet of retail space on connected lower levels. The newly-signed 42,000 square foot movie theater will apparently be on the third floor. In total, the two towers will occupy 1.1 million square feet. That figure is astounding, given it is 17 percent of Seaport Square's whole development master plan. 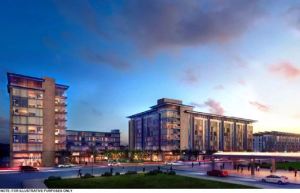 It seems that it's not just One Seaport Square that's on the rise - rental rates in Southie's D Street and West Broadway are gaining ground in the rental price game, as it just surpassed Beacon Hill's monthly prices (at least for August). In particular, figures show that D Street/W Broadway area rentals averaged $2,839 for 1 bedroom units, whereas Beacon Hill were at a flat $2,800. Looking at it even deeper, the D Street area now seems like it will take the same rates as Back Bay, with the latter only $100 more expensive at this time.

As for who can actually afford the rents on these units? There's subset of Bostonians who can easily afford them, apparently. These will be well-paid dual-income households who aren't necessarily with children, but like to focus on living a high profile lifestyle. Majority of these individuals belong to the financial, health, and tech industries, which everyone knows is where the big bucks are and explains a lot.