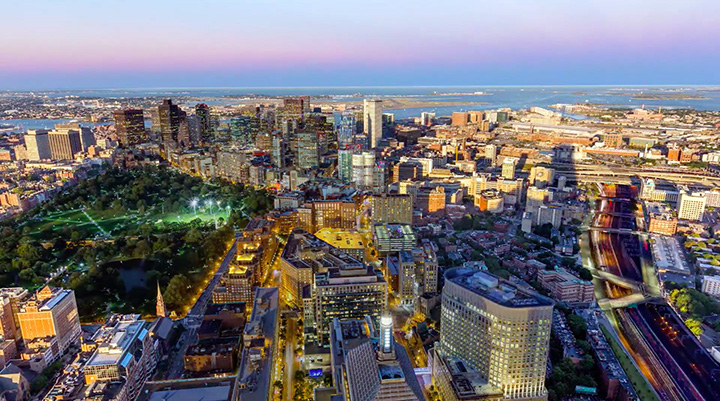 As Bostonians today say their final farewell to its beloved 'Urban Mechanic', Mayor Thomas Menino, we thought it only right to look back at his impact in the community, most tangible in his efforts to revitalize the city's skyline through various projects and neighborhood developments. Throughout his 5-term, 20-year mandate, Mayor Menino not only reinvigorated Boston's real estate industry by means of transforming the project approval process, but also transformed the city's skyline and streetscapes into bustling pockets of Boston full of life.

Let's take a look now at how Mayor Menino helped make Boston the first-class city it is today:

THE INNOVATION DISTRICT If there was a single project that would best concretize Mayor Menino's vision for Boston, it would be the Seaport's Innovation District. Virtually non-existent before his term, the district was transformed from a mere shipping yard of the city, into one of its busiest not only in terms of night life and destination restaurants, but also of all the many residential and commercial projects that have and are continuing to sprout out of the former-harbor site. Properties continue to enjoy floaty median prices as the neighborhood aka "the district" is seen as one of the city's premier places to live in, especially to the youth.

Major offices have also moved there, John Hancock - being one of them - as well as a good number of incubator and bootstrap startups that have flocked to the area. And even developments are soon to come up, with Seaport Square's groundbreaking slated for this month. The whole district teems of vibrant yuppies who have been fueled and encouraged by Menino to pursue their dreams in leading the way in the bio and tech industries, providing the Seaport as their experimental grounds.

EAST BOSTON WATERFRONT It was in late 2011 when Mayor Menino announced an ambitious plan to jumpstart nearly $600 million in development along the East Boston waterfront, development that could create up to 1,800 housing units and that would be partly dependent on beefed-up water transit. Part of it, the 176-unit Portside at Pier One, is under construction. There are numerous projects on the pipeline as well, transforming once dead harbor spaces into lush green spaces with housing units that lookout to the Boston skyline.

DOWNTOWN CROSSING AND MILLENNIUM PROPERTIES Of the dozens of proposals that the Downtown Crossing neighborhood has seen - none of them seem to be what fit the Bostonian persona. That's not until Mayor Menino and the honchos over at Millennium Properties hatched up the idea to reinvigorate the neighborhood by making it livable instead of focusing on retail alone. The result? The recently turned over Millennium Place Residences and the mega development that is Millennium Tower alongside improvements to the mid-section of the neighborhood that will re-establish the dominance of Downtown Crossing as the "center" of  the city. Complete subway station renovation and restoration of the old Filene's Basement building are but only a few of the enhancements Bostonians should look forward to.

DUDLEY SQUARE Being from Hyde Park himself, Mayor Menino knew his roots. He surmised that this neighborhood - far from what Beacon Hill or the Back Bay is - should resonate the real Boston. His do-over of neighborhood-friendly projects from street improvements to moderinzation of schools to more affordable community-based housing developments, truly sends what he had wanted the Square to be - the home of all Bostonians.

THE BACK BAY BOOM Most of the cranes you see atop the Back Bay are from projects approved during Mayor Menino's administration, and most likely those that will come up in the next two to three years will still be from his time. Because of his strong will to build Back Bay up (as there was no other way to expand), led to expansion high-rises projects being approved. For instance, the tower that will rise on Christian Science Plaza will be 699 feet, making it not only by far the tallest residential tower in Boston but the third-tallest overall, behind office giants the Pru and the John Hancock. It is slated to include 211 hotel rooms on the first 20 floors and 180 condos over the rest of the 60 stories.

TD GARDEN TOWERS Aside from regulating real estate developments heavily, Mayor Menino also incentivized and encouraged developers to flock to Boston for their latest project. His office provided millions in tax breaks to spur job creation and housing. One of these developments is the TD Garden Tower, a large-scale, transformative $950 million project will include three towers, the tallest reaching 600 feet. The buildings will contain a 306-room hotel; 668,000 square feet of offices; almost 500 residences; and retail, including a Star Market.

THE 'UPPER' SOUTH END Let's not forget the South End. Several large-scale residential projects are going up a in what was formerly empty lots and abandoned industrial complexes in the neighborhood's northeastern corner, near where I-90 meets I-93. The expansive Ink Block Development, which includes five residential buildings as well as retail and grocery,  is set to transform the area once again - a "modern South End on the tip", if you will.

FENWAY Last but not the least, the Fenway/Kenmore area is also enjoying tons of developments thanks to Mayor Menino's focus on providing more for Bostonians that do not necessarily want to be in the very middle of it all. Landmark Center, for instance, is just one of the monstrous projects that will give the ballpark district its highly-anticiapted makeover. Mayor Menino also oversaw the reopening of the Yawkey commuter rail station in the area, giving suburbans easy access not only to the ballpark, but also to connect the up and coming retail centers in the neighborhood to the rest of the city.