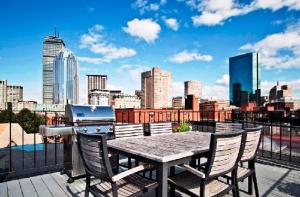 Coming off the news that Boston is now seeing its highest percentage of individuals aged 23-65 living with roommates, we thought it best to provide you with an update on rental prices by neighborhood now that the peak months of move-in are over. However, before we get down to the details, let's first take a look at what's causing this upsurge in "rooming".

According to Boston.com, rents are growing faster than household income in the Boston metro area, causing 33 percent (that right, a third!) of city dwellers aged 23-65 to find roomies than take on an apartment solo. The national average is only a percentage point below, and what's more bothersome is that a decade ago, only a quarter - 25 percent - of the same sample population lived with housemates. The primary is reason for this, the study found, is that incomes aren't climbing as fast as rental rates. Specifically, within a ten-year period, Bostonian city-dwellers spend 32 percent of their monthly income on rent, a figure that goes up as high as 40 percent in more recent time. That puts Boston as the fourth most expensive cities in the US to rent in. Currently, the median rent is $2,250 per month across all types of properties and neighborhoods. 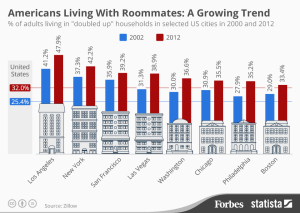 This is perhaps also a reason why demand for new homes have waned in the past couple of months, spurring growth for condominium and multi-family housing snapped up by smart and real estate savvy investors. Take note though, if you are "investor in waiting", you might want to consider snapping up something or partnering with builders now -- you'll almost sure to reap all the benefits down the road when all of those roommates decide its time to part ways and buy for their own. Keep in mind though, the 33 percent that reside with roommates include fresh grads who may still be in the "sharing mode".

And now for the good stuff. If you're one of those 23-65 year olds looking to move and share apartments, then this bit is for you: the neighborhoods of Brookline (Coolidge Corner, Brookline Village), Fenway/Kenmore, and Davis Square will yield you the best bang for your buck. As you can see from the graph below, these 1 bedroom apartments in these neighborhoods hover between $2,080-$2,200. Still a hefty amount compared elsewhere nationally, but given Boston's place in the list of most expensive cities, that isn't at all surprising.

As with time and again, the Top 10 Most Expensive Neighborhoods include Downtown Boston, Chinatown / Leather District, Kendall Square, D Street and West Broadway, Bunker Hill, West End, Back Bay, South End, Cambridgeport, and finally East Cambridge where 1 bedroom rents range from a low of $2,610 to a high of $3,200.  LOOK FOR RENTALS NOW 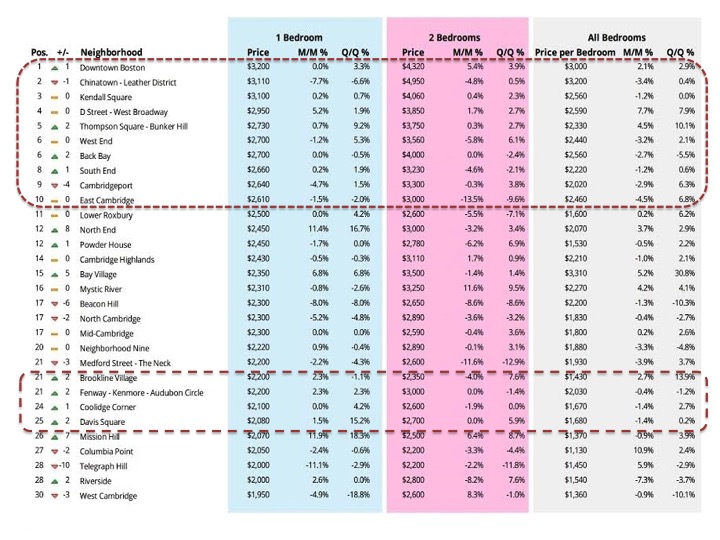