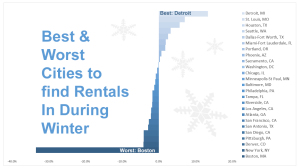 The official start of winter may still be a full month away, but the recent cold spell that has been plaguing most of the country is making this year especially more challenging for renters. There's an analysis out there that has taken a look at how good or bad cities are when it comes to its rental market. Not surprisingly, Boston has come in 1st place for being the toughest city to find rentals in during the winter season, coming in before New York!

This is perhaps because unlike other cities in the country, most of Boston's rental inventory dwindles by the time September rolls on by - a sure sign of the how most of the neighborhoods mostly cater to students who come back for Fall semester.  At one point, rental inventory in the city fell to as little as 28 days - way, way below that the healthy and normal 4-month mark.  Despite this fact, Boston is still a city of many residents, and for those who held off moving in on the onset of fall, there's still hope - even if you're on a budget. Don't be deterred with looking at buildings you thought you couldn't afford.

In fact, and despite this recent cold winter rental home hunting crowning, Boston still has inventory to offer that are not necessarily out of your price range. That's because post-recession developments started their turnover this year, hence increasing the inventory in the city.  In fact, most developments now have incentives and promos in place to help prospective tenants find their way to their doorways. Take for example these guys:

THE KENSINGTON 665 Washington Street, Chinatown / Greenway This newly-opened luxury 381-unit development in the heart of Downtown Boston is currently offering a minimum of two months free on its leases. Caveat? They only have the penthouses open for rental, most of its units rented out as soon as it opened its doors last July.

315 ON A 315 A Street, Seaport / South Boston Also opened at the beginning of the year, this hip and hot apartment complex on the verge of the Innovation District and South Boston's D Street is offering a month free (two, if you rented before Fall) to most of its applicants. Just make sure to remind us about it though, as it's not exactly being overly advertised.

Contact us now if you're looking for a rental - we'll be sure to give you a rundown of all the buildings and their offerings.