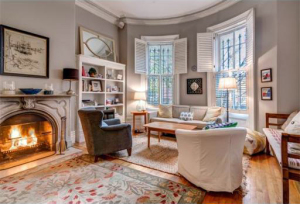 If you thought holiday shopping is just for gifts, then think again. An assortment of properties have gone to market in the last week, with some of them greatly reducing their original price tag in the hopes of closing before the brutal winter months. Some of the deals don't even compare to what you might have gotten a year ago since sellers held off from flooding the market during the peak summer sales month.

Take for example this studio in the heart of the Back Bay with a cozy view of Commonwealth Mall that's only going for $360,000. You could say that that deal was near impossible last spring or summer, but that's definitely not the case now. In fact, it's the lowest-priced unit in the Back Bay currently. The studio, located on the fourth floor of posh The Vendome Residences, features quite an open layout (you'll have to see for yourself to believe) that looks out to the Commonwealth Mall. To top it all of, the building is a deal in itself, with 24-hour concierge and doorman service. More details

Aside from this ultimate bargain buy, there are also some deals to be had across Back Bay, Beacon Hill, and the South End, all within the $500K breaking point. Here's a map to help you in your open house travels this weekend: